We’ve said it numerous times and we’re going to say it again. Data preparation is crucial for any data analysis. If your data is messy, there’s no way you can make sense of it, let alone a computer. Computers are great at handling large, even enormous data sets, speedy computing and recognizing patterns. But they fail miserably if you give them the wrong input. Also some classification methods work better with binary values, other with continuous, so it is important to know how to treat your data properly.

Orange is well equipped for such tasks.

Preprocess is there to handle a big share of your preprocessing tasks.

Preprocessing needs to be used with caution and understanding of your data to avoid losing important information or, worse, overfitting the model. A good example is a case of paramedics, who usually don’t record pulse if it is normal. Missing values here thus cannot be imputed by an average value or random number, but as a distinct value (normal pulse). Domain knowledge is always crucial for data preparation.

For certain tasks you might want to resort to binning, which is what Discretize does. It effectively distributes your continuous values into a selected number of bins, thus making the variable discrete-like. You can either discretize all your data variables at once, using selected discretization type, or select a particular discretization method for each attribute. The cool thing is the transformation is already displayed in the widget, so you instantly know what you’re getting in the end. A good example of discretization would be having a data set of your customers with their age recorded. It would make little sense to segment customers by each particular age, so binning them into 4 age groups (young, young-adult, middle-aged, senior) would be a great solution. Also some visualizations require feature transformation - Sieve Diagram is currently one such widget. Mosaic Display, however, has the transformation already implemented internally.

Discretized data with ‘years employed’ lower or higher then/equal to 8 (same for ‘yearly income’ and ‘experience in the industry’.

This widget essentially creates new attributes out of your discrete ones. If you have, for example, an attribute with people’s eye color, where values can be either blue, brown or green, you would probably want to have three separate attributes ‘blue’, ‘green’ and ‘brown’ with 0 or 1 if a person has that eye color. Some learners perform much better if data is transformed in such a way. You can also only have attributes where you would presume 0 is a normal condition and would only like to have deviations from the normal state recorded (‘target or first value as base’) or the normal state would be the most common value (‘most frequent value as base’). Continuize widget offers you a lot of room to play. Best thing is to select a small data set with discrete values, connect it to Continuize and then further to Data Table and change the parameters. This is how you can observe the transformations in real time. It is useful for projecting discrete data points in Linear Projection. 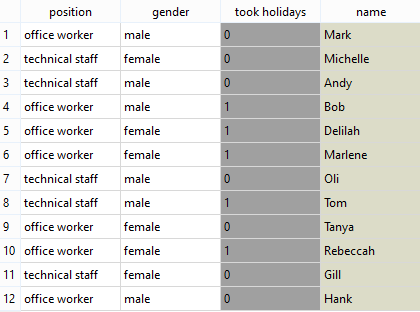 Empty columns and columns with the same (constant) value were removed.

Of course, don’t forget to include all these procedures into your report with the ‘Report’ button! :)