We presented the Orange Bioinformatics add-on at the ISMB/ECCB conference in Vienna, a joined event covering both 19th Annual International Conference on Intelligent Systems for Molecular Biology and 10th European Conference on Computational Biology.

We were giving out Orange stickers (with the URL) to the poster’s visitors. There was some interest; in the end we gave out about 10 of them, mostly to biologists, who were excited to perform some of the analysis themselves. Among the visitors was also a developer of a similar tool who seemed slightly surprised that something like this already exists, while another was disappointed because Orange only runs locally.

See the poster in action on the photo taken by Gregor Rot. 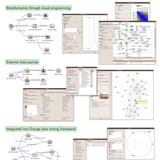 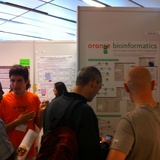