Orange is Getting Smarter

In the past few months, Orange has been getting smarter and sleeker.

Since version 3.15.0, Orange remembers which distinct widgets users like to connect, adjusting the sorting on the widget search menu accordingly. Additionally, there is a new look for the Edit Links window coming soon.

The information is collected anonymously for the users that opted-in. We will use this data to improve the widget suggestion system. Furthermore, the data provides us the first insight into how users interact with Orange. Let’s see what we’ve found out from the data recorded in the past few weeks.

There are four different ways of adding a widget to the canvas, 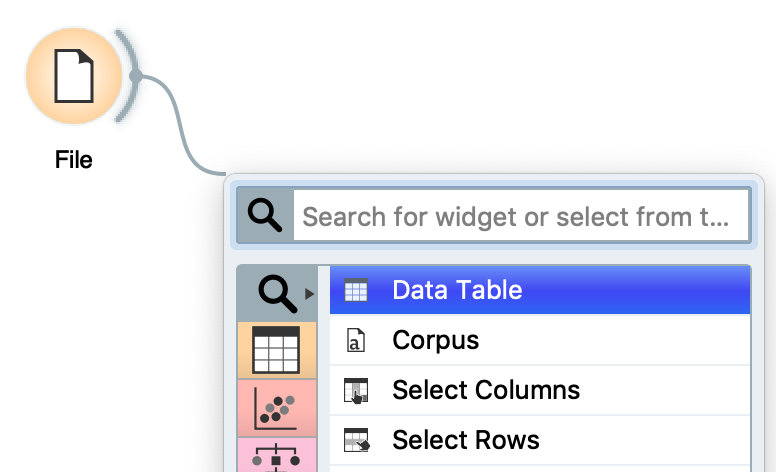 Among Orange users, the most popular way of adding a new widget is by dragging the communication line from the output widget – we think this is the most efficient way of using Orange too. However, the patterns vary among different widgets.

How users add widgets to canvas, from 20,775 add widget events.

Users tend to add root nodes such as File via a click or drag from the sidebar, while adding leaf nodes such as Data Table via extension from another widget.

The widget popularity contest goes to: Data Table! Rightfully so, one should always check their data with Data Table.

52% of sessions tracked consisted of no widgets being added (the application just being opened and closed). While some people might really like watching the loading screen, most of these are likely due to the fact that usage is not tracked until the user explicitly opts in.

Each bit of collected data comes at a cost to the privacy of the user. Care was put into minimizing the intrusiveness of data collection methods, while maximizing the usefulness of the collected data.

Initially, widget addition events were planned to include a ‘time since application start’ value, in order to be able to plot a user’s actions as a function of time. While this would be cool, it was ultimately decided that its usefulness is outweighed by the privacy cost to users.

For the keen, data is gathered per canvas session, in the following structure: