One of the key techniques of exploratory data mining is clustering – separating instances into distinct groups based on some measure of similarity. We can estimate the similarity between two data instances through euclidean (pythagorean), manhattan (sum of absolute differences between coordinates) and mahalanobis distance (distance from the mean by standard deviation), or, say, through Pearson correlation or Spearman correlation.

Our main goal when clustering data is to get groups of data instances where:

This would be ideal. But we rarely get the data, where separation is so clear. One of the easiest techniques to cluster the data is hierarchical clustering. First, we take an instance from, say, 2D plot. Now we want to find its nearest neighbor. Nearest neighbor of course depends on the measure of distance we choose, but let’s go with euclidean for now as it is the easiest to visualize.

Euclidean distance is calculated as:

We can write this down also in a form of a pseudocode: 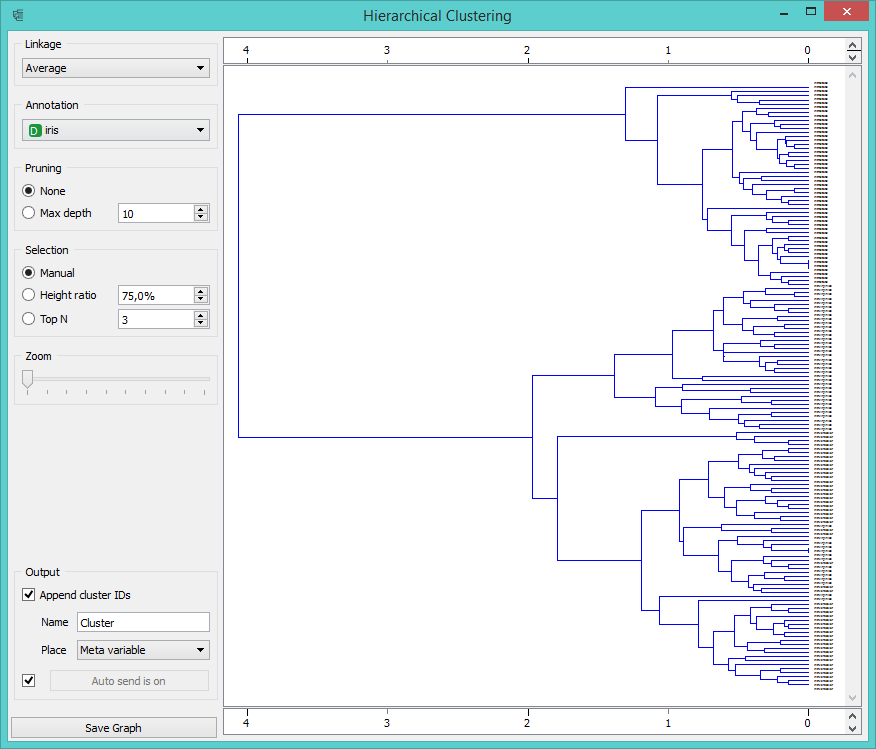 Visualization of this procedure is called a dendrogram, which is what Hierarchical clustering widget displays in Orange.

Another thing to consider is the distance between instances when we have already two or more instances in a cluster. Do we go with the closest instance in a cluster or to the furthest one?

The downside of single linkage is, even by intuition, creating elongated, stretched clusters. Instances at the top part of the red C are in fact quite different from the lower part of the red C. Complete linkage does much better here as it centers clustering nicely. However, the downside of complete linkage is taking outliers too much into consideration. Naturally, each approach has its own pros and cons and it’s good to know how they work in order to use them correctly. One extra hint: single linkage works great for image recognition, exactly because it can follow the curve.

There’s a lot more we could say about hierarchical clustering, but to sum it up, let’s state pros and cons of this method: